Watercooling employs similar technologies as found in a car's cooling system. Heat is carried away from heat sources (CPU, video card, chipset) by a fluid which is cooled by a radiator. The advantages are that the radiator can be much larger than a heatsink and can be positioned in cooler air (often outside the PC case) than you have access to at the heat source. Also, larger fans can generally be used on a radiator than on a CPU heatsink, which leads to a quieter cooling system.

Watercooling is becoming less and less extreme, with Apple introducing a commercial water-cooled computer in 2004.

A typical loop consists of a pump, radiator, waterblocks and some sort of filling & bleeding apparatus (eg: reservoir). 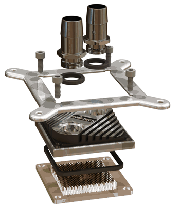 AN exploded view of the Swiftech Apogee GTX water block.

Simply put, a waterblock is a device that aims to transfer the heat from a component to the coolant (typically water) as efficiently as possible.

Usually consisting of a copper plate with some kind of design milled into it, and covered by a top plate (made out of either polycarbonate, copper, brass, anodized aluminium or nowadays, delrin/acetal) which houses the barbs that allow the tubing to connect to it.

Some waterblocks also have a middle plate, which usually acts as an accelerator for the water. 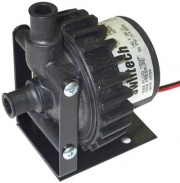 A pump is the driving force behind any watercooling loop. They come with 3 ratings of importance, max flow, usually given in litres/minute or gallons/hour, max pressure, usually given in mega-pascals or meters of H2O and finally, output power, given in Watts.

Maximum flow (Q) is achieved when there is no restriction on the output or input of the pump, in practise this is never acheived, due to the pump housing itself acting as a restiction.

Maximum pressure (P) is achieved when the flow is at zero. A common method of measuring the head of a pump is to get a length of tubing, attach it to the output and raise it vertically. Head is literally the maximum height the pump can push water up a vertical tube.

Power is the energy (W) that the pump both draws, and adds to the loop. The heat added (output power) is the important one. Using a pump with 700LPH and 30MH2O in your loop may prove to be a huge waste of money if the pump heat negates the gains from the increased flow that this pump delivers. Depending on your radiator's size, less than 20W is desirable.

When shopping for a pump, the following criteria are offered as a guide:

Also popular are evaporative coolers. This is where the cooling effect of water evaporation is used for cooling. Given the right conditions, the coolant can actually reach sub ambient temperatures, even with high heat loads (although it cannot be cooled below the dew point, which depends on both temperature and humidity). Evaporative coolers are, however, typically larger and all require additional coolant to be regularly added to make up for the loss due to evaporation. The requirement that they be exposed to air also introduces problems with dust and biological contaminants (like algae). Evaporative systems also tend to be larger and more cumbersome and usually represent a poor choice for portable systems (ie. LAN gaming).

Bubbles reduce cooling performance, make noise when they go through the pump, increase friction in the pump wearing out bearings quicker, and can also introduce bacteria, making the cooling less efficient and potentially clogging waterblocks etc. this is best avoided. To make a sealed rig, you can assemble the unit underwater in a "bath" of the coolant being used. However, many chose to instead deploy a simple component to bleed the air out of a rig and thus enable it to be filled. At the simplest, a T-peice can be deployed with the stem of the T blanked off using a cork or plastic end-barb. A variety of reservoirs can be made or purchased, which allow quicker removal of bubbles and easier filling. Reservoirs should be placed immediately prior to the pump, to reduce the resistance at the pump's intake.

The tubing is used to connect the components. The smaller the bore of tubing, the larger the restriction on flow will exist when high flow rates are used (Flow is roughly Q=P^2/R). However, smaller tubing has the benefits of permitting tighter radius turns and taking up less physical space in the case. Cheap vinyl tubing (commonly available at hardware stores) is commonly used, although premium vinyl tubing (such as Tygon and Clearflex) are much more flexible and easier to route. Silicon based tubing was once popular, however the increased availability of high quality vinyl tubing has reduced its prevalence.

Tubing typically stays on by itself if it fits the barb firmly. However, clamps are highly recommended due to the security they bring. Zip ties are cheap, and clamp the vast majority of the circumference. Stainless steel worm-screw hose clamps are popular, look good and clamp a large portion of the circumference. The plastic clamps used in irrigation systems are also effective, although they are prone to unfastening themselves and hence not a safe option.

The order of components doesn't affect the performance of the rig (except for reservoirs, above). For a typical rig, the coolant changes temperature by less than 1/2 of one degree celsius within the loop (see Temperature changes of coolant within the loop), and hence its best to rig the loop to make plumbing the tubing easy. That said, if its easy, by all means put the radiator prior to the CPU and get the coolest coolant onto the CPU block...