OpenBSD is a freely available UNIX-like computer operating system descended from Berkeley Software Distribution (BSD), a Unix derivative developed at the University of California, Berkeley. It was forked from NetBSD (the oldest of the three most popular BSD-based operating systems still active today, with FreeBSD being the other) by project leader Theo de Raadt in late 1995. The project is widely known for the developers' insistence on open source code and quality documentation; uncompromising position on software licensing; and focus on security and code correctness. The project is coordinated from de Raadt's home in Calgary, Alberta, Canada. Its logo and mascot is Puffy, a pufferfish. Target release dates are in May and November. The current release is 4.5 and it was released on May 1, 2009. OpenBSD is widely considered to be the most secure operating system in the world today.

The OpenBSD system is extremely well-documented and there are many FAQs and guides freely available on the Web, so instead of re-writing most of it, below I have listed some resources by which you can find out more about OpenBSD:

OpenBSD has no wealthy sponsors, nor a business model.

OpenBSD is released on official CD sets. By purchasing these official release sets, related books and other merchandise such as T-shirts and posters, or by making donations, you are helping the project remain active. Donations and merchandise are some of the only ways that the project is able to survive. You can also donate hardware to assist development.

That said, you are able to download a bootable installation CD image (ie. install45.iso).

That leads us right into...

The installation procedure of OpenBSD is well-documented in the FAQ.

If you want to see it an action, check out this video on YouTube.

What is BSD anyway? How does it compare to Linux?

Have a look here.

Why do I want to use OpenBSD?

For an answer in the FAQ, check this.

Can I use it as a desktop?

Yes, many people do. More information on this topic here.

What hardware does it support?

Check this page and click your hardware platform for all the details.

Is it really that secure?

More information on its security features can be found here

What software comes with it?

Check the port tracking link above. Here it is again: ports

Can I do XYZ with OpenBSD?

Read the FAQ for the answers to these questions and many more. It is very well-written and covers a lot.

You can discuss OpenBSD and get help with it on OCAU by joining the Other Operating Systems area of the forums. 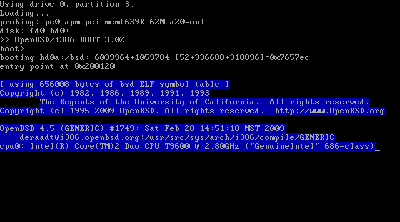