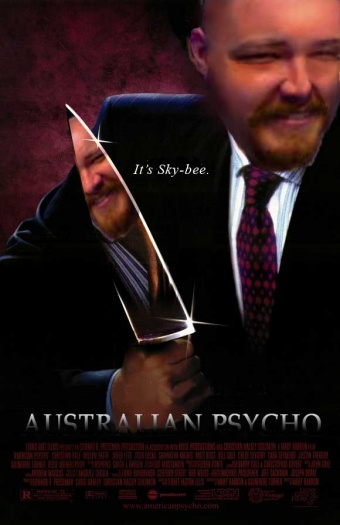 Tiberius J. Stoatfondler, or "Sciby" as we know him, is in every way living the millionaire playboy lifestyle. Well, apart from the bits involving women or money. Nontheless, he is widely accepted as not only the sexiest OCAU forum member, but the sexiest entity in the observable universe.

Legends abound of his feats of bravery. Some say he lost his hair while rescuing babies from a burning orphanage. Others insist the orphanage was made from chocolate mud cake and Sciby had to eat the way to baby salvation. Either way, a sacrifice he bears the marks of to this day.

There are some dark secrets to this international man of mystery, however. Few dare question why it is that he mispronounces his username as "Sky-bee" or "Sky-bee damnit!", conjuring up the image of some kind of impossible flying insect. Those who know the truth realise that Sciby is pronounced "Skibbie"... as in... something that scibs... or scibbles... or... something.

Moving on, his mastery of international languages is staggering. Why, he knows Japanese so well, that he could easily pick up a particularly understanding schoolgirl, given the presence of enough alcohol and perhaps some dirty magazines and a whiteboard. Alas, his ability to lipread while dancing is not so strong.

Sometimes, on a still, quiet night in the forums, if you glance up at the forum logo a ghostly figure can be seen. Sciby, rearing up on his shiny blue steed, roaring his famous post-battle cry.. "I'm never.. drinking.. agaaaaaain!"

Sciby has been involved with OCAU since roughly 2000, first as a moderator for the OCAU IRC channel on the Oz.Org network, then as a forum-wide administrator for the first incarnation of the OCAU forums. He wrote his first review in 2002, and has slowly added to the OCAU review repository, as well as acting as editor from time to time.

In April 2006, Agg asked Sciby to cohost the new OCAU Podcasts, which now has over 20 episodes. While it's not a regular as it once was, it still happens from time to time.

Sciby often organises OCAU events in Australian capital cities, the last being in September 2006, in Brisbane and Sydney, with both events well attended.

He currently lives with three hundred 18 year old university students, is struggling with a World of Warcraft addiction, and enjoys making fun of stupid people, which can lead to some confusing moments when confronted with a mirror.

He prefers blondes. Or brunettes.