I make no claims to being an expert. But I have been doing this line of work for over 25 years. When I first had the idea to write this it was going to be a simple guide. It Grew! - Shepete

Televisions & Computer Monitors share many similarities. As such, the following article contains reference to both. Generally speaking, what applies to one applies to the other.

This is by no means a comprehensive list of faults, But should cover the most common faults. I have the intention of adding or removing material as I see fit.

There are many "bightee's" inside a TV or monitor case. Delve inside entirely at your own risk. The major dangers, apart from electrocution, while switched on are.

then bouncing out with great velocity. Is the power switched on? Is the power light on? If not it is possible that it is a fuse, but not very likely. Fuses usually blow for a good reason. Do you have high tension? When switched on at the power switch, monitors usually make a "SSST" sound. This is the picture tube energising. Inside the glass, it is recieving approx. 27 Kv. (Kilo Volts) If you hold your arm. (or something else hairy,) in front of the pic. tube when you turn it on, you will feel the hairs stand on end, due to an intense static charge inside the tube. This can sometimes be followed by the sound of a relay. This is the Degauss cct kicking in. If you here & feel this it is reasonably safe to assume that (most) of the power supply is operating.

2 - Picture comes on for a while, but gradually fades away,sometimes the pic. will fade back on for a while & then fade away again

This is an indication of a "dry joint" in the heater cct. For the electrons to be emitted properly, their need to be a "heater" at the back of the tube. That is the orange glow you see around the neck of the tube while it is running. The heater operates off 6.3 volts, usually supplied by the power supply in monitors, & usually from the LOPT (Line OutPut Transformer) in televisions.

3 - Screen comes up intensely white. Sometimes with fine white diagonal lines through it

Probably a fault with the ABL (Automatic Beam Limiter) part of the cct. The electron guns are being overdriven.

4 - Screen comes up intensely Red, Green, or Blue, with fine lines diagonally through it 5 - Screen intermittently drops one colour, or one colour missing The same as a vertical collapse but the line goes down the screen instead of across. This is not often seen because usually the device dies as soon as it happens. If you see a solid white vertical line on your monitor or TV, turn it off IMMEDIATELY, & have it repaired. If it is still running, not to much damage has been done. If you are very lucky, you may find a dry joint around the LOPT. If the set no longer runs, the horizontal stage has probably blown up. This is serious repair stuff. Probably not worth repairing. Far too many causes to list.

8 - Picture geometry faulty at the sides

Pin cushion problems. Because a CRT (Cathode Ray Tube) tries to make a rectangular picture from a pin-point, also the characteristics of the tube, Circuitry is required to try & straighten out the sides. Pin-cushion problems will cause "bowing" of the sides,or picture distortion. on the sides.

Picture tubes being electro-magnetic devices are effected greatly by stray magnetic fields. Magnets, speakers or even turning the picture tube on its side, while running are enough to upset the purity of the screen. If you have green, red or blue patcheson the screen. It is because of either a problem with the automatic Degauss cct, or the automatic degauss cct is unable to cope with the degree of induced magnetism in the screen. Usually a sweep with a degaussing wand is enough to rectify the problem. A degaussing wand in action. This is a superb image of what misconvergence looks like. You can see that the RGB beams don't line up, so you get three distint images, in red, green & blue. The most common reason most electronic devices fail is due to electrolytic capacitors being "cooked". They can only stand so much heat for so long.This is a common occurrance. One of the power supply signal capacitors, mounted up against a radiator.(Oops, I mean heatsink) Do you think they know what built in obsolescents is? 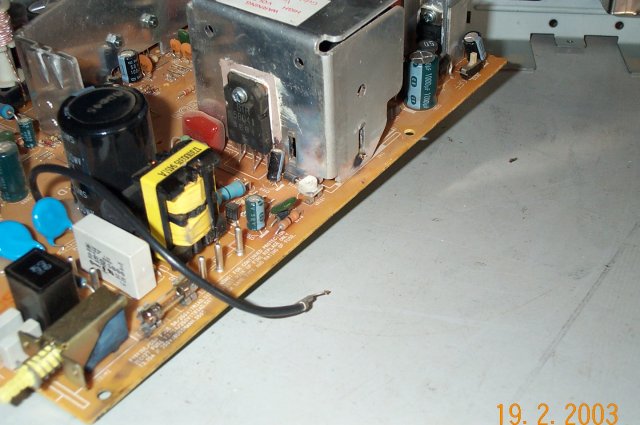 Why do some monitors screatch and what the noise from TV's is?

TV's & monitors's are "full" of oscillators. Virtually everything relies on an oscillator. I would guess that you are quite young, your hearing is very good. I think, What you are hearing is the oscillation of the deflection yoke, The deflection yoke is just a transformer. As the coils oscillate, they vibrate. Although they are dipped in varnish to reduce the vibrations (by glueing them together) sometimes they still emit an audible sound. I suspect that you have acutely good hearing, & can hear sounds that most people can't. I have middle age deafness, which is a big problem for me, Customers bring in TV"s with louder than "normal" "sounds". I can't hear them at all. Incidentally, women, (In general) have superior hearing to men. Men's hearing, deteriorates after about age 18. I think the excepted standard is 20 Hz to 20 Khz. If you are young with good hearing. As you age "evertthing" works less efficiently. I suspect my hearing is about 20 hz to 9 Khz. Such is life.

I heard the CRT squeal on most TVs is 16kHz?

I don't know "off hand" but that sounds about right. Except, it is not the CRT that is squealing.

What would one do to fix the #6 problem? I have an old crt that does this with the stand, but once the stand is taken off it works fine

Presumably, if you tap the case the fault comes on & off. If so it is a "dry joint".

Could this be in any perticular part, or on any of the pcb's?

If you are are not qualified, do not take the cover off.

Look for a "largish" aluminium heatsink, located probably near the middle of the PCB. (It may be on the right hand side.)

If you are confident enough to do this. With the cover off & an image showing, tap the heatsink with the "handle" of a screwdriver. Search for the most sensitive heatsink. Disconnect the power look closely at the other side of the heatsink & you will probably find a "dry jointed" I.C.

If you kill yourself, I have never heard of you.

It will probably be an "Electrolytic capacitor" around the vertical output I.C.

You say that a Horizontal collapse will bring a line running down the screen. Isn't up and down VERTICAL and left to right HORIZONTAL?

Do you know anyone who could build a new cable for a monitor?

This is actually one of the more difficult problems to overcome. I presume the cable is damaged at the plug end. This is where thy normaly fail You can buy HD15 plugs from WES components for about $5.00. The problem is, the only way I know to do it is to "cut off", the old plug. Then slice it open with a Dremel to figure out the colour coding. Then re-terminate the cable on the new plug, using heatshrink. It takes a couple of hours. Not difficult, but time consuming.

I have a 34cm tv that worked perfectly ... But now it strays off channel all the time (it slowly gets fuzzy then just loses the channel altogether). It's ok with the 2 VHF channels in my area but anything UHF is buggered

Probably a faulty tuner. These are mostly generic and are available from WES Components for about $30.00. It probably has a dry joint in it. But they are just about impossible to repair. If you look inside one, you will know what I am talking about.

The problem is similar to #2 and 3 in that there are fine white lines (see image for angle of lines) going across the screen.

At the top of the screen the lines are closer together than at the bottom (they spread from the top to the bottom). If I look carefully I can just make out a blue line about 2 pixels above the white line (a white kind of colout, but it can still be seen on a white background). The blue line can barelly be seen compared to the white. The colour is also very washed out even with contrast on max.

Sounds like screen current. Possibly a faulty electrolytic capacitor. Look for a capacitor around the LOPT Probably about 10 or 22 uf 250V. Could also be a resistor.

I've got are vertical retrace lines, happening about every inch or so all the way down the screen. They're green, so at first I thought maybe the green gun was being overdriven.

Either the green gun is being overdriven, or the picture tube is stuffed. If you are handy with a soldering iron, you can swap the three largish transistors on the neck board around. If the fault changes to red or blue lines, it is a faulty transistor.

How Do You make a Proview monitor last longer than its warranty period?

TAKE THE BASE OFF! The pressure on this flimsy plastic causes the circuit board to crack this problem makes up for around 50% of the warranties 40% are Dry Joints and 5% Colour Guns and 5% Power Units. Be very careful when moving them around is all i can say.

I have an intermittent loss of red colour on my Acerview 56c, and have concluded that a tap at the back of the monitor (coinciding with the back board on the crt) fixes the problem temporarily.

What specific area of the board or yoke would I have to look at to fix this problem?

The Neck board.. If it has covers, remove them, They are usually soldered on.

You will probably find 3 largish transistors with heat sinks attached. If not it will be a single In Line I,C, Look for a " dry joint' on one of the legs.

Are these dry joints?

That looks like flux used in the soldering process..

Also known as LOPT, or "Line OutPut Transistor". It switches the EHT transformer."Extra High Tension transformer" on & off, thus generating, most of the secondary voltages in the TV or monitor. Also the "High Tension" for the picture tube.

The focus pot is located on the eht transformer. The big black thing with the red wire going up to the tube. Ther will be 2 or 3 pots, one will be marked "focus".

What brands do you work on the most?

Sorry if you don't like the answer. (Putting on flameproof suit now). In order of most frequently repaired.

Where do you get all your service manuals from though?

I usually dont. Most stuff, you just figure out. Service manuals for TV's are available from "High Country Services". Monitor sevice manuals or schematics are virtually impossible to get. As are spare parts.

I hope this is of interest. - Shepete