1. If you are told to read the wiki by an admin it is for a reason. If you persistently ask questions which are answered in this Wiki page you may receive a 24 hour ban and/or a loss of builder privs

2. In order to be given builder privileges (the right to build, destroy and craft) in the OCAU server, you must be a member of the OCAU forums for longer than 3 months. In addition to this, you are required to have 50 or more posts in the forums. This means the post count shown in the left hand bar when you've made your post, and does not include pub posts, shop and swap posts and any other area in which you do not increase your post count. Do not spam the forum to raise your post count, as this will earn you a ban from OCAU. To get builder privileges if you meet these requirements, post in the minecraft thread on OCAU with your username, then join the game and let an admin know.

3. We want the OCAU Minecraft server to be as friendly as possible, so therefore any sort of rude behaviour, swearing, and general dickery will not be tolerated.

4. No offensive imagery or wording should be built on the server. This includes swastikas, curse words made out of blocks and rude body parts.

5. No exploiting glitches/bugs/etc (tool drop health reset is okay, though). No item duping. If you are caught duping, or with duped or otherwise ill-gotten items, chances are you will be treated as the guilty party.

6. The most important rule. No griefing which means building in or destroying things in someones area. You do not receive a warning if you are caught griefing by an admin or OP; you are banned on the spot.

Unless otherwise stated, one warning is given for all rule breaking. Any slip ups after that will lead to a permanent ban. Note that admins and ops CAN ban on the first offence.

Generally use common sense and be a nice person and courteous to other players. If you want to build next to someone or build something under another players creation ask the owner first and respect their wishes.

Please note, if you are banned please PM an admin (preferably the one involved) on OCAU if you have questions or would like to argue your case. Complaining in the thread will do nothing but hurt your case.

If you need one of these materials (except carts) for any reason (for example, flint and steel for burning large amounts of leaves), ask an admin and we will be happy to help you out provided the area is safe to do so in. 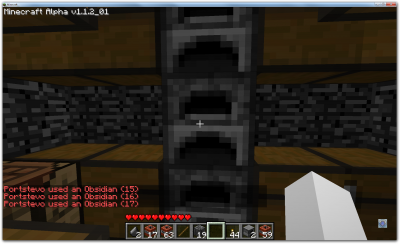 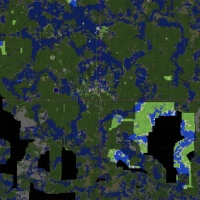 The fix below will break all sound but will stop the game crashing and black screening.

On version Alpha 1.1.2_01 you need to update the java game library's to fix the black screen crashing.

Replace all the files from the zip file including those in the native folder.

That should be it then and the game should be stable.