This page is based on the "primer" section of OCAU's Vapochill Mk2 PE review.

In simple terms, a phase-change cooler works like a water-cooling system - it uses a fluid to take heat energy from one place to another place where it is radiated or convected out into the atmosphere. A phase-change system is more complicated, and more effective, because it manipulates the pressure of the fluid and changes it from a liquid to a gas and back again. This is called changing the phase of the fluid, hence the name. It's the same system used in refrigerators and air-conditioners.

Here's an explanation of how the VapoChill system, and similar phase-change coolers, achieve their ultra-low temperatures. We'll split the system into 4 basic parts, using a household refrigerator as an example also: 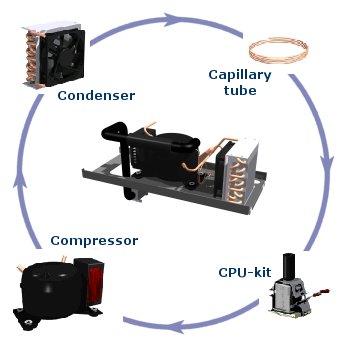 The compressor is perhaps the most recognizeable part. If you've ever seen inside the bottom or back of a refrigerator you will have seen a similar squat sphere or cylinder. When refrigerant enters the compressor, it is relatively warm and at low pressure. Functioning basically like a pump, it compresses the refrigerant and provides pressure to force it around the rest of the cooling system.

As the hot, high-pressure gas flows through the condenser, it radiates heat into the ambient air and cools down. When it cools below the dew point, it condenses back into a liquid - the first phase change. Remember that this is only possible because it is under high pressure, so its dew point is artificially high. This process is how the heat is released from the otherwise closed system.

In your refrigerator, the extensive coil system that runs probably the full height of the back of the unit is the condenser. That's why the back of the fridge feels warm - it's radiating the heat removed from inside the fridge and also heat created when the refrigerant was compressed. In the VapoChill this is a front-mounted radiator similar to those seen in watercooling systems, with a 120mm fan forcing ambient-temperature air through it to accelerate the cooling process.

A good condenser removes a fair bit of heat from the refrigerant, so at this stage it's now a high-pressure liquid at nearly ambient temperature. However, what we want to send to the evaporator is very cold refrigerant. Remembering from above that pressure and temperature are closely linked, the way that we will lower the temperature of the coolant is to lower its pressure. The capillary tube is a "metering device" that controls the flow of refrigerant. As it exits the capillary tube the pressure drops rapidly, taking the temperature with it - well below ambient and in this case, well below 0C. This now low-pressure, extremely low-temperature refrigerant floods the evaporator.

This is where the magic happens! The evaporator, like the condenser, is where the cooling system meets the outside world. In your refrigerator, the evaporator is inside the walls and back of the unit. In the freezer, you can sometimes see an exposed metal plate which is extremely cold - this is an evaporator. In the VapoChill, the evaporator is fastened to the CPU socket and a 1mm thick copper disk presses against the CPU core. On the other side of the disk, inside the evaporator, extremely cold refrigerant absorbs the heat load of the CPU and evaporates. Remember, the refrigerant can be as low as -30C inside the evaporator, so even ambient air touching the evaporator core would be enough to make it evaporate. Throw 50-100W or more of heat load from a CPU and this second phase-change can be dramatic. Carrying the heat energy away, the warmer (but still fairly cold) refrigerant vapour is sucked back into the compressor and the cycle begins again.

The net result of all this is that the CPU core, pressed against the evaporator, becomes extremely cold. We observed an on-die temperature of -3C reported by Motherboard Monitor for our P4 test CPU. Considering our testing was conducted in the middle of a long hot summer here in Sydney, Australia, that is well below ambient and impossible for any conventional aircooler or even watercooling.